“Why do Turks and Kurds hate each other?” I’ve asked myself this question many times, I’ve asked the interested parties, I keep asking myself which could be the roots of such a deep hatred. [...]
During my time in Turkey I had the chance to hear both sides on the Kurdish Question and I met Turks and Kurds of all ages, sex, religion and socio-cultural background, from the friends and colleagues working in local and foreign NGOs as humanitarian aid workers, to my conservative neighbours, from students to their grandmothers, from businessmen to marginalized families in the periphery, from activists to artisans in the bazaar, from lorry drivers I travelled with on long distances to the baker down the street.

I talked to many refugees, and to a Turkish soldier working at the border with Syria. I listened to kids, many kids. From the kids in the orphanage survived from war and misery, to the Turkish kids learning English in a private school in the city centre, from the ones in the outskirts of the city, who didn’t go to school, to the sons of my colleagues, grown up together with hundreds of international volunteers. From the refugees kids on the run with their families, to the ones alone, picking up rubbish in the street to re-sell it., to the hospitalized kids who didn’t know if they would grow up. In children, in all those children, I want to look for the virus of hatred towards the Other: can we talk about a hate virus? If yes, when does it set on? Is it possible to intervene before it sets on? How much does the environment where one grows up contribute to fueling hatred?

I did my research combining bibliographical and sitographical information with first-hand information collected during my stay in Turkey, observing and asking people questions.
I decided to identify and understand the main historical, political and sociological causes of mutual hatred between Kurds and Turks, trying to reply to my initial question, to then try to find possible solutions.
I think I owe it to all the people I met long the road, fighting every day to counteract this hatred and to promote equality and tolerance for all, without losing hopes.
In the first chapter I will go over a brief excursus on the history of Kurdistan, focusing on the 20th century happenings and the more recent history.
In the second chapter I will narrow down on education and the Turkish school system, looking for traces of hate speech rhetoric in socialization.
In the third and last chapter, I will talk about conflict transformation, trying to identify possible solutions in the field of peace education. 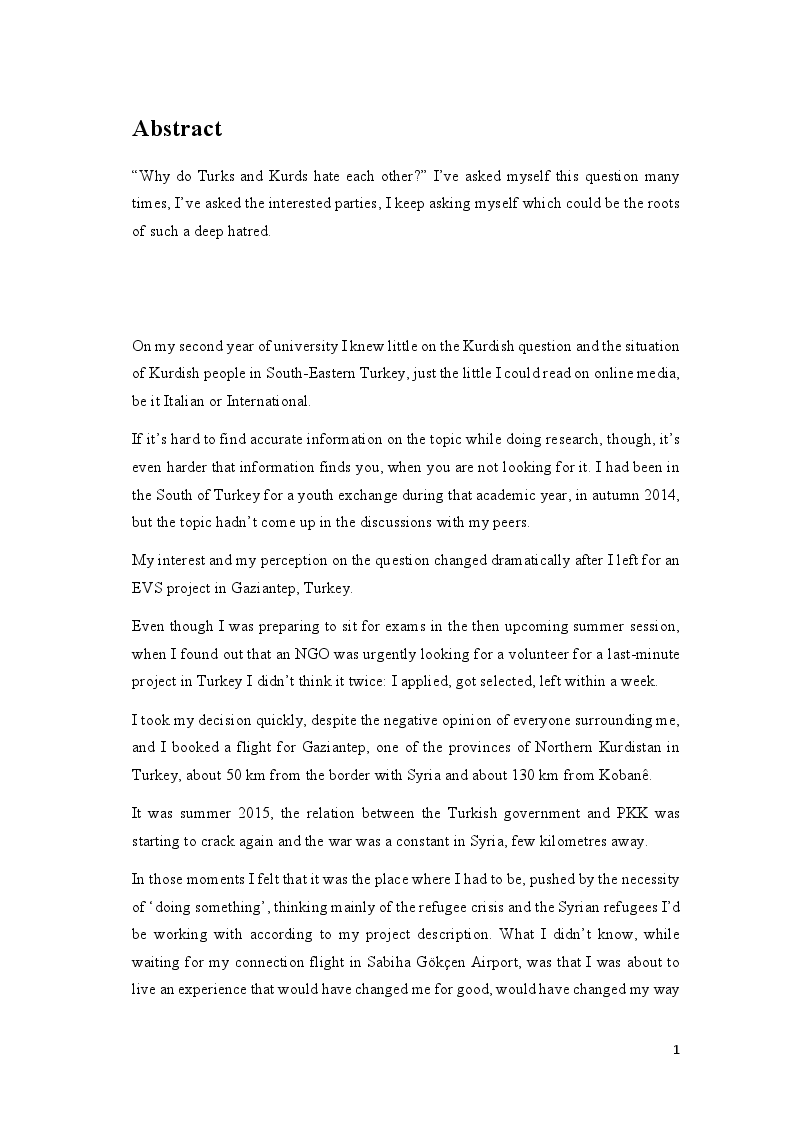 Mostra/Nascondi contenuto.
1 Abstract “Why do Turks and Kurds hate each other?” I’ve asked myself this question many times, I’ve asked the interested parties, I keep asking myself which could be the roots of such a deep hatred. On my second year of university I knew little on the Kurdish question and the situation of Kurdish people in South-Eastern Turkey, just the little I could read on online media, be it Italian or International. If it’s hard to find accurate information on the topic while doing research, though, it’s even harder that information finds you, when you are not looking for it. I had been in the South of Turkey for a youth exchange during that academic year, in autumn 2014, but the topic hadn’t come up in the discussions with my peers. My interest and my perception on the question changed dramatically after I left for an EVS project in Gaziantep, Turkey. Even though I was preparing to sit for exams in the then upcoming summer session, when I found out that an NGO was urgently looking for a volunteer for a last-minute project in Turkey I didn’t think it twice: I applied, got selected, left within a week. I took my decision quickly, despite the negative opinion of everyone surrounding me, and I booked a flight for Gaziantep, one of the provinces of Northern Kurdistan in Turkey, about 50 km from the border with Syria and about 130 km from Kobanê. It was summer 2015, the relation between the Turkish government and PKK was starting to crack again and the war was a constant in Syria, few kilometres away. In those moments I felt that it was the place where I had to be, pushed by the necessity of ‘doing something’, thinking mainly of the refugee crisis and the Syrian refugees I’d be working with according to my project description. What I didn’t know, while waiting for my connection flight in Sabiha Gökçen Airport, was that I was about to live an experience that would have changed me for good, would have changed my way