The thesis is about the complex paradigm of Chinese social media, making specific remarks on their usage in marketing strategies. For companies that want to enter Chinese market is fundamental to have a deep knowledge of it and its culture and to develop strategies that involve the use of social media. This thesis aims to analyse all these aspects. 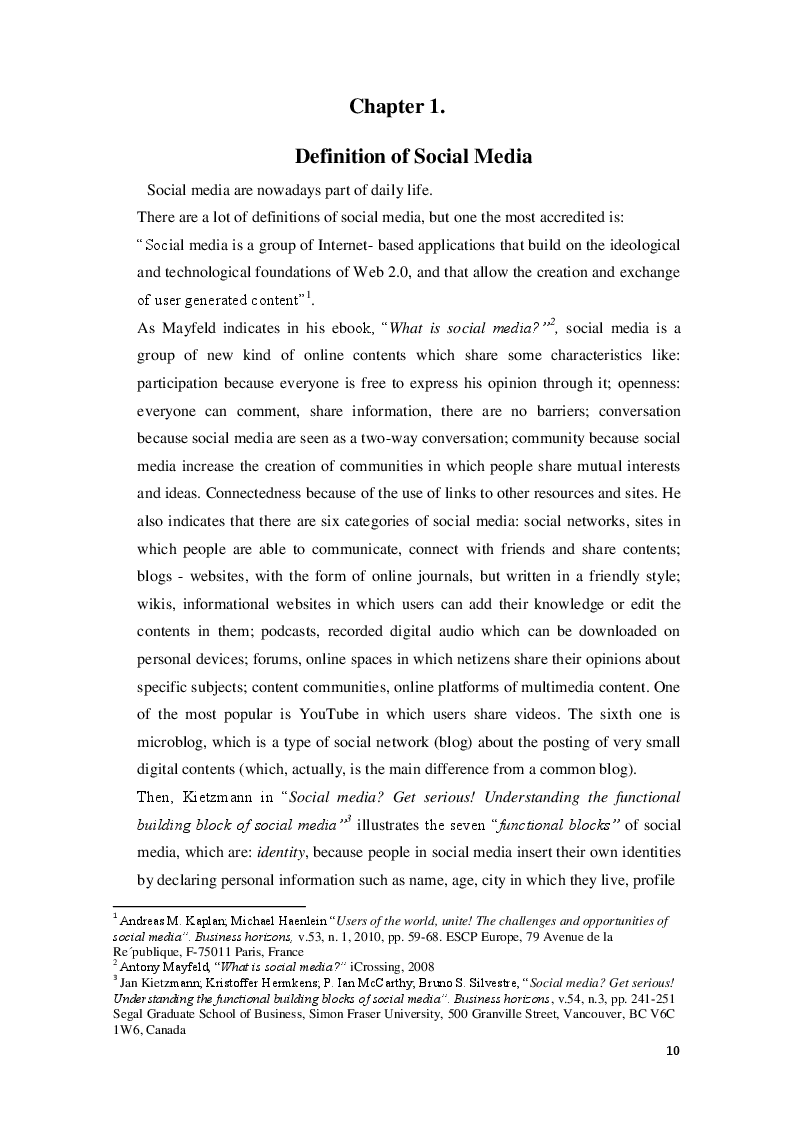 Mostra/Nascondi contenuto.
10 Chapter 1. Definition of Social Media Social media are nowadays part of daily life. There are a lot of definitions of social media, but one the most accredited is: “Social media is a group of Internet- based applications that build on the ideological and technological foundations of Web 2.0, and that allow the creation and exchange of user generated content” 1 . As Mayfeld indicates in his ebook, “What is social media?” 2 , social media is a group of new kind of online contents which share some characteristics like: participation because everyone is free to express his opinion through it; openness: everyone can comment, share information, there are no barriers; conversation because social media are seen as a two-way conversation; community because social media increase the creation of communities in which people share mutual interests and ideas. Connectedness because of the use of links to other resources and sites. He also indicates that there are six categories of social media: social networks, sites in which people are able to communicate, connect with friends and share contents; blogs - websites, with the form of online journals, but written in a friendly style; wikis, informational websites in which users can add their knowledge or edit the contents in them; podcasts, recorded digital audio which can be downloaded on personal devices; forums, online spaces in which netizens share their opinions about specific subjects; content communities, online platforms of multimedia content. One of the most popular is YouTube in which users share videos. The sixth one is microblog, which is a type of social network (blog) about the posting of very small digital contents (which, actually, is the main difference from a common blog). Then, Kietzmann in “Social media? Get serious! Understanding the functional building block of social media” 3 illustrates the seven “functional blocks” of social media, which are: identity, because people in social media insert their own identities by declaring personal information such as name, age, city in which they live, profile 1 Andreas M. Kaplan; Michael Haenlein “Users of the world, unite! The challenges and opportunities of social media”. Business horizons, v.53, n. 1, 2010, pp. 59-68. ESCP Europe, 79 Avenue de la Re´publique, F-75011 Paris, France 2 Antony Mayfeld, “What is social media?” iCrossing, 2008 3 Jan Kietzmann; Kristoffer Hermkens; P. Ian McCarthy; Bruno S. Silvestre, “Social media? Get serious! Understanding the functional building blocks of social media”. Business horizons, v.54, n.3, pp. 241-251 Segal Graduate School of Business, Simon Fraser University, 500 Granville Street, Vancouver, BC V6C 1W6, Canada