The imagery of the castle in Edgar Allan Poe

This thesis wants to reveal the element of the house in Poe, in particular that of the castle, as a reflex of the characters' inner space: the perceptive element analyzed through the narrators' eyes reveals the architectural structures and the furniture in these four stories, are preparatory to the development of the story, explain and transform it. At the same time, the characters influence the environment around them, finding the connection between their psychic evolution and the following changes in the furniture.
In an anthropological-cultural and analytic prospective of reading a picture can be composed, where the reciprocal influences among the various parts create a double-locked door: with the first key, we can draw the objective links among architecture, furniture and characters; the second key, definitively opens the door of dream-like perception, which cancels and recreates the space for a catharsis, uniting and levelling the separation formed before between the object and the subject of the story. The space of dream is capable to contain both the fictitious universe of reality as a deception and the real one where the self, recomposing his own identity thanks to a desire no more alienated but reproduced and realized through the image, becomes stronger thanks to the last and imperative sharing: the ones making death the media means par excellence for the conjunction with the universe creative and panic entity. 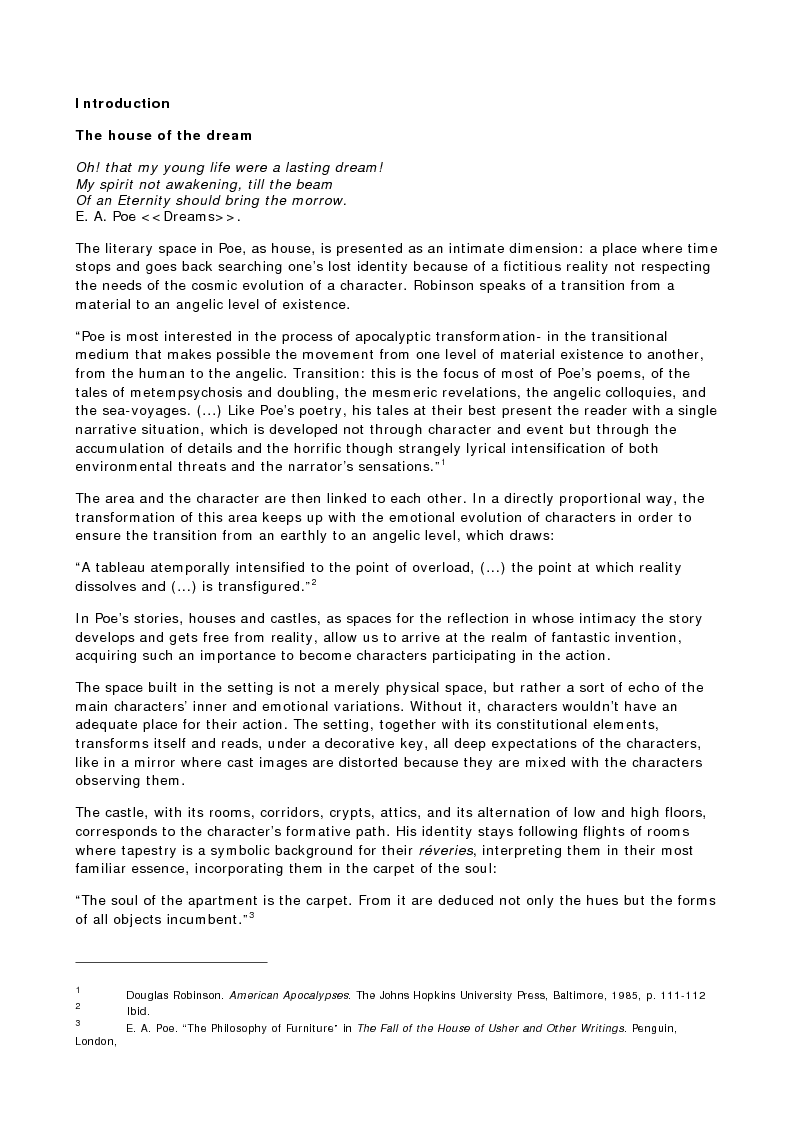 Mostra/Nascondi contenuto.
Introduction The house of the dream Oh! that my young life were a lasting dream! My spirit not awakening, till the beam Of an Eternity should bring the morrow. E. A. Poe <<Dreams>>. The literary space in Poe, as house, is presented as an intimate dimension: a place where time stops and goes back searching one’s lost identity because of a fictitious reality not respecting the needs of the cosmic evolution of a character. Robinson speaks of a transition from a material to an angelic level of existence. “Poe is most interested in the process of apocalyptic transformation- in the transitional medium that makes possible the movement from one level of material existence to another, from the human to the angelic. Transition: this is the focus of most of Poe’s poems, of the tales of metempsychosis and doubling, the mesmeric revelations, the angelic colloquies, and the sea-voyages. (...) Like Poe’s poetry, his tales at their best present the reader with a single narrative situation, which is developed not through character and event but through the accumulation of details and the horrific though strangely lyrical intensification of both environmental threats and the narrator’s sensations.”1 The area and the character are then linked to each other. In a directly proportional way, the transformation of this area keeps up with the emotional evolution of characters in order to ensure the transition from an earthly to an angelic level, which draws: “A tableau atemporally intensified to the point of overload, (...) the point at which reality dissolves and (...) is transfigured.”2 In Poe’s stories, houses and castles, as spaces for the reflection in whose intimacy the story develops and gets free from reality, allow us to arrive at the realm of fantastic invention, acquiring such an importance to become characters participating in the action. The space built in the setting is not a merely physical space, but rather a sort of echo of the main characters’ inner and emotional variations. Without it, characters wouldn’t have an adequate place for their action. The setting, together with its constitutional elements, transforms itself and reads, under a decorative key, all deep expectations of the characters, like in a mirror where cast images are distorted because they are mixed with the characters observing them. The castle, with its rooms, corridors, crypts, attics, and its alternation of low and high floors, corresponds to the character’s formative path. His identity stays following flights of rooms where tapestry is a symbolic background for their réveries, interpreting them in their most familiar essence, incorporating them in the carpet of the soul: “The soul of the apartment is the carpet. From it are deduced not only the hues but the forms of all objects incumbent.”3 1 Douglas Robinson. American Apocalypses. The Johns Hopkins University Press, Baltimore, 1985, p. 111-112 2 Ibid. 3 E. A. Poe. “The Philosophy of Furniture” in The Fall of the House of Usher and Other Writings. Penguin, London,

As a literary genre, the Gothic is a difficult subject to deal with. Though its principal themes and features can be easily enumerated, the genre itself is extremely mutable and generically impure. Hence, among haunted houses, evil villains, ghosts, gloomy landscapes, madness, terror, suspense, horror, all univocally classified as “gothic,” the essence of the genre remains unclear. The reason being the Gothic’s...