China in Latin America: political and economic implications of Beijing's involvement in the region

Relations with Latin America have never been and will probably never be a priority for the People's Republic of China (PRC), as they will be a dependent variable of domestic economic needs and other more important foreign policy goals – among all, the ties with the United States.
Nevertheless, they deserve some attention.
The PRC finds in Latin America a market of 500 million people and an almost infinite source of commodities: it currently gets from here around 17% of its overall agricultural products imports, and 11% of its fuel and mining ones; it is a big buyer of three of the four Latin American commodities (soy, copper and oil).
The region is also a valuable partner in the struggle for a new, more democratic world order; it is a 33-wide voting block whose consensus is useful whenever the human rights policy of the PRC comes under the scrutiny of the United Nations or any of its agencies. Finally, it is a pawn in the battle for the sovereignty over Taiwan, since 12 of the 23 countries that recognize the Republic of China (ROC) are in Central America and the Caribbean, plus Paraguay alone in South America.
For Latin America, the PRC is a huge 1.3 billion people market and a potential source of much-needed Foreign Direct Investment - actually smaller than expected and mostly concentrated in the fiscal heavens of the Caribbean. Politically, the mere existence of a China-option is a source of leverage when dealing with the United States..
Apparently, deepening ties with Latin America is a winning solution for the PRC. The same is not completely true for Latin America, whose relationship with Beijing can be beneficial, but with some caveats.
There is the problem of export concentration in bilateral trade: in 2006, 62.5% of the region's exports to China were in the commodity sector - it was just 35% in 1995. Latin America, especially South America, is thus exposed to the price volatility of its resources, historically more elevated than that of the manufactured goods. This breeds macroeconomic uncertainty. Furthermore, export concentration in the commodity sector might hinder the upgrading of the industrial structure of those countries who find in it an easy and quick source of revenues. A positive effect on the welfare of the people and the fight against poverty and inequality is not automatically related to the blossoming of exports of natural resources, but depends on economic policy choices.
Competition with Chinese manufactures in the third markets is Central America's main problem in its relationship with the Dragon. Transportation costs offset only about 1/3 of China's competitive advantage, and Latin America has to greatly improve its infrastructure in order not to loose additional market shares.
Politically, the PRC portrays itself as the biggest developing country in the world and stresses the importance of having cooperative relations with Latin America. But, rhetoric aside, the actors might have different goals.
China will not risk to jeopardize its relationship with the US for the sake of Latin America, an area that it still considers in Washington's sphere of influence: calls for multipolarism will most likely never entail an anti-American alliance in the Western Hemisphere, and partnerships and friendships with the most controversial actors in the area (Venezuela and Cuba) are usually de-politicized and presented as predominantly business-relations.
As the voting rights realignments in the World Bank shows, China is able to make the biggest improvements of its position and then celebrate them as victories of the developing world as a whole.
Latin America has also to deal with the problem of asymmetrical representation: the PRC's strategic partners (Argentina, Brazil, Mexico and Venezuela) have more opportunities to exchange views with their Chinese counterparts than the rest of the region – Argentina, Brazil and Mexico are also members of the G-20 and Brazil is one of the BRICs. But, given their size, their economies and their foreign policy goals, they can hardly represent the whole area.
On the issue of UN Security Council reform, the region is split in 3 positions: Brazil wants a permanent seat as one of the G4, Argentina, Mexico and Colombia oppose any increase in the number of permanent seats, and the Caribbean countries have their own proposal. China is currently supporting none of these, as it gives priority to the African countries and rejects the idea of admitting its long-time rival Japan to the Security Council as a permanent member.
The countries that still recognize Taiwan gain a lot of attention and financial aid from the ROC, and can use that as a bargaining tool with the PRC. Nevertheless, Beijing does most of its trade with the Latin American countries it has diplomatic relations with, and has proven to be quite assertive on what it perceives as national security issues, using and threatening to use its veto power against peacekeeping operations in Guatemala and Haiti. 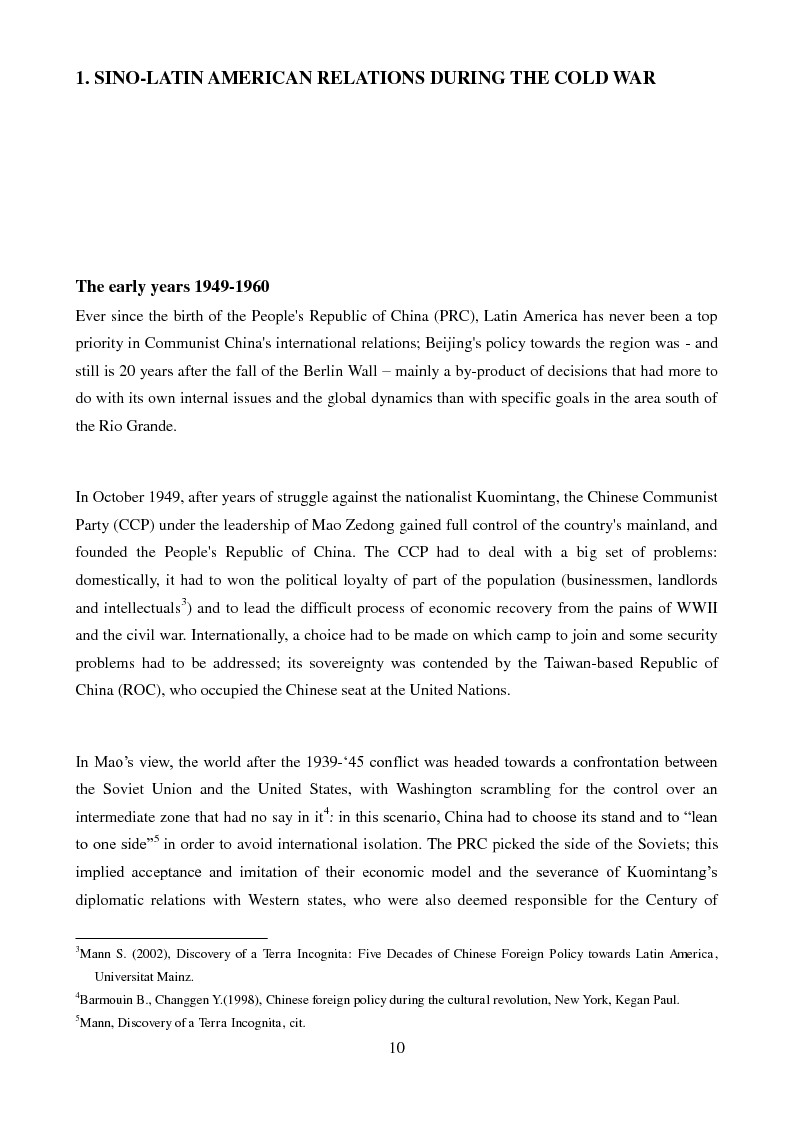 Mostra/Nascondi contenuto.
1. SINO-LATIN AMERICAN RELATIONS DURING THE COLD WAR The early years 1949-1960 Ever since the birth of the People's Republic of China (PRC), Latin America has never been a top priority in Communist China's international relations; Beijing's policy towards the region was - and still is 20 years after the fall of the Berlin Wall – mainly a by-product of decisions that had more to do with its own internal issues and the global dynamics than with specific goals in the area south of the Rio Grande. In October 1949, after years of struggle against the nationalist Kuomintang, the Chinese Communist Party (CCP) under the leadership of Mao Zedong gained full control of the country's mainland, and founded the People's Republic of China. The CCP had to deal with a big set of problems: domestically, it had to won the political loyalty of part of the population (businessmen, landlords 3 and intellectuals) and to lead the difficult process of economic recovery from the pains of WWII and the civil war. Internationally, a choice had to be made on which camp to join and some security problems had to be addressed; its sovereignty was contended by the Taiwan-based Republic of China (ROC), who occupied the Chinese seat at the United Nations. In Mao‘s view, the world after the 1939-‗45 conflict was headed towards a confrontation between the Soviet Union and the United States, with Washington scrambling for the control over an 4 intermediate zone that had no say in it: in this scenario, China had to choose its stand and to ―lean 5 to one side‖ in order to avoid international isolation. The PRC picked the side of the Soviets; this implied acceptance and imitation of their economic model and the severance of Kuomintang‘s diplomatic relations with Western states, who were also deemed responsible for the Century of 3 Mann S. (2002), Discovery of a Terra Incognita: Five Decades of Chinese Foreign Policy towards Latin America, Universitat Mainz. 4 Barmouin B., Changgen Y .(1998), Chinese foreign policy during the cultural revolution, New York, Kegan Paul. 5 Mann, Discovery of a Terra Incognita, cit. 10