Demand for Populism: a Behavioural Profiling

Using the German Socio-Economic Panel (SOEP) in 2006-2015, I test some possible behavioral components of demand for populism. I define as populist AfD, Piratenpartei, NPD, DieRepublikaner and DieRechte, and include also DieLinke in a separate dummy. I find that a higher level of risk-love is correlated with a higher support for populist parties (without Die Linke), and that populist supporters’ profiling is compatible with Prospect Theory. I also find that populist supporters are significantly more impatient, overconfident, and likely to believe in conspiracy theories. Finally, I inquire the "Big Five" personality traits, and find that the most robust effects are those of Openness, positively correlated with leaning toward populist parties, and Agreeableness, negatively correlated. The results provide a profiling of populist voters, but do not ensure evidence of behavioral causation of populism when adding individual fixed-effects. 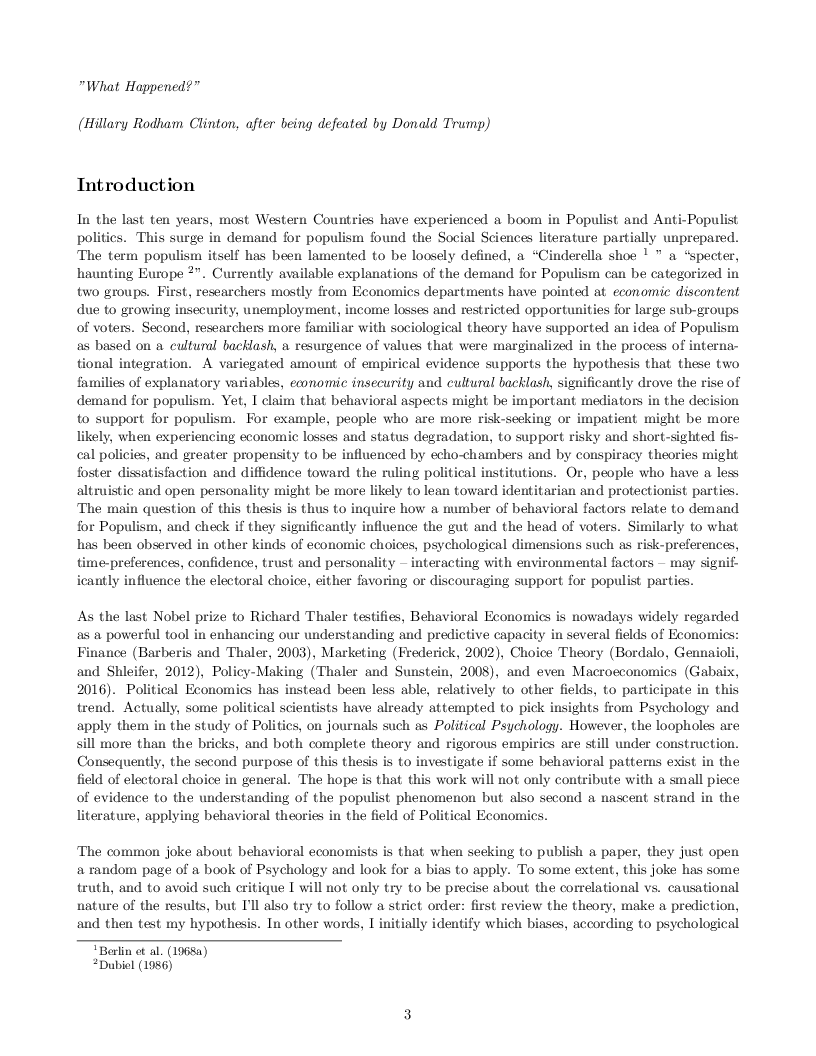 Mostra/Nascondi contenuto.
"What Happened?" (Hillary Rodham Clinton, after being defeated by Donald Trump) Introduction In the last ten years, most Western Countries have experienced a boom in Populist and Anti-Populist politics. This surge in demand for populism found the Social Sciences literature partially unprepared. The term populism itself has been lamented to be loosely dened, a \Cinderella shoe 1 " a \specter, haunting Europe 2 ". Currently available explanations of the demand for Populism can be categorized in two groups. First, researchers mostly from Economics departments have pointed at economic discontent due to growing insecurity, unemployment, income losses and restricted opportunities for large sub-groups of voters. Second, researchers more familiar with sociological theory have supported an idea of Populism as based on a cultural backlash, a resurgence of values that were marginalized in the process of interna- tional integration. A variegated amount of empirical evidence supports the hypothesis that these two families of explanatory variables, economic insecurity and cultural backlash, signicantly drove the rise of demand for populism. Yet, I claim that behavioral aspects might be important mediators in the decision to support for populism. For example, people who are more risk-seeking or impatient might be more likely, when experiencing economic losses and status degradation, to support risky and short-sighted s- cal policies, and greater propensity to be inuenced by echo-chambers and by conspiracy theories might foster dissatisfaction and didence toward the ruling political institutions. Or, people who have a less altruistic and open personality might be more likely to lean toward identitarian and protectionist parties. The main question of this thesis is thus to inquire how a number of behavioral factors relate to demand for Populism, and check if they signicantly inuence the gut and the head of voters. Similarly to what has been observed in other kinds of economic choices, psychological dimensions such as risk-preferences, time-preferences, condence, trust and personality { interacting with environmental factors { may signif- icantly inuence the electoral choice, either favoring or discouraging support for populist parties. As the last Nobel prize to Richard Thaler testies, Behavioral Economics is nowadays widely regarded as a powerful tool in enhancing our understanding and predictive capacity in several elds of Economics: Finance (Barberis and Thaler, 2003), Marketing (Frederick, 2002), Choice Theory (Bordalo, Gennaioli, and Shleifer, 2012), Policy-Making (Thaler and Sunstein, 2008), and even Macroeconomics (Gabaix, 2016). Political Economics has instead been less able, relatively to other elds, to participate in this trend. Actually, some political scientists have already attempted to pick insights from Psychology and apply them in the study of Politics, on journals such as Political Psychology. However, the loopholes are sill more than the bricks, and both complete theory and rigorous empirics are still under construction. Consequently, the second purpose of this thesis is to investigate if some behavioral patterns exist in the eld of electoral choice in general. The hope is that this work will not only contribute with a small piece of evidence to the understanding of the populist phenomenon but also second a nascent strand in the literature, applying behavioral theories in the eld of Political Economics. The common joke about behavioral economists is that when seeking to publish a paper, they just open a random page of a book of Psychology and look for a bias to apply. To some extent, this joke has some truth, and to avoid such critique I will not only try to be precise about the correlational vs. causational nature of the results, but I’ll also try to follow a strict order: rst review the theory, make a prediction, and then test my hypothesis. In other words, I initially identify which biases, according to psychological 1 Berlin et al. (1968a) 2 Dubiel (1986) 3