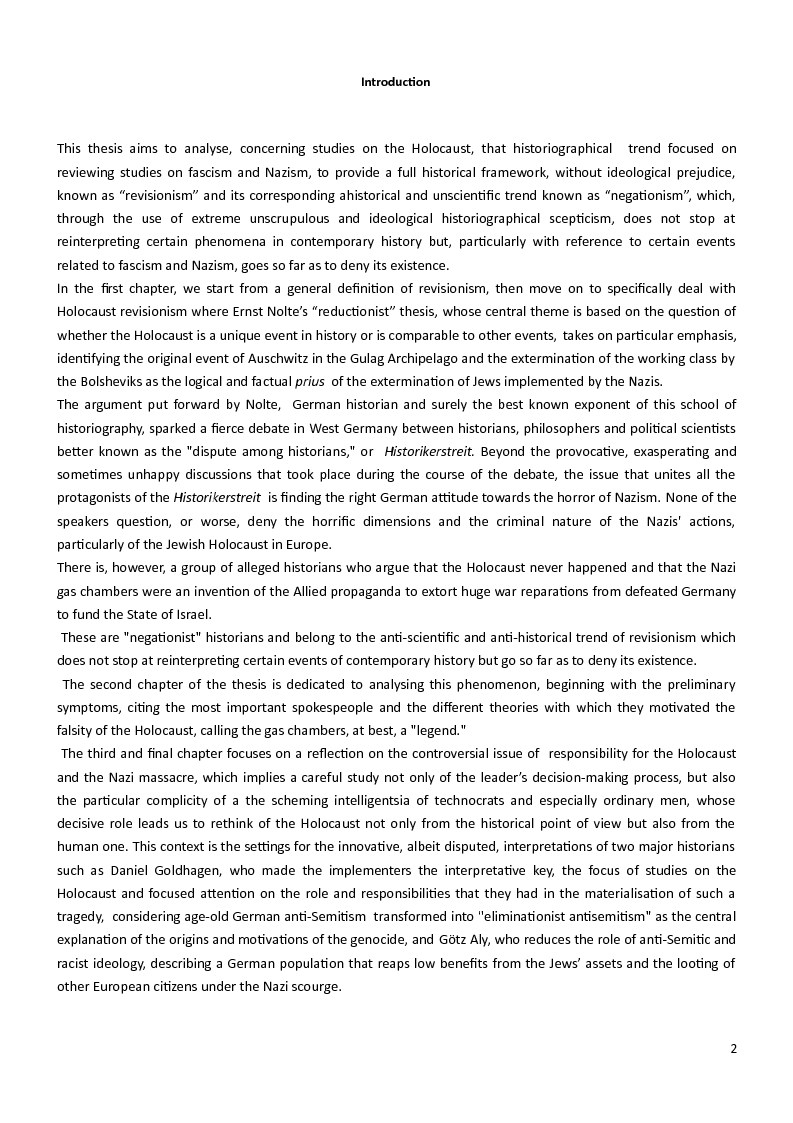 Mostra/Nascondi contenuto.
Introduction This thesis aims to analyse, concerning studies on the Holocaust, that historiographical trend focused on reviewing studies on fascism and Nazism, to provide a full historical framework, without ideological prejudice, known as “revisionism” and its corresponding ahistorical and unscientific trend known as “negationism”, which, through the use of extreme unscrupulous and ideological historiographical scepticism, does not stop at reinterpreting certain phenomena in contemporary history but, particularly with reference to certain events related to fascism and Nazism, goes so far as to deny its existence. In the first chapter, we start from a general definition of revisionism, then move on to specifically deal with Holocaust revisionism where Ernst Nolte’s “reductionist” thesis, whose central theme is based on the question of whether the Holocaust is a unique event in history or is comparable to other events, takes on particular emphasis, identifying the original event of Auschwitz in the Gulag Archipelago and the extermination of the working class by the Bolsheviks as the logical and factual prius of the extermination of Jews implemented by the Nazis. The argument put forward by Nolte, German historian and surely the best known exponent of this school of historiography, sparked a fierce debate in West Germany between historians, philosophers and political scientists beter known as the "dispute among historians," or Historikerstreit. Beyond the provocative, exasperating and sometimes unhappy discussions that took place during the course of the debate, the issue that unites all the protagonists of the Historikerstreit is finding the right German attude towards the horror of Nazism. None of the speakers question, or worse, deny the horrific dimensions and the criminal nature of the Nazis' actions, particularly of the Jewish Holocaust in Europe. There is, however, a group of alleged historians who argue that the Holocaust never happened and that the Nazi gas chambers were an invention of the Allied propaganda to extort huge war reparations from defeated Germany to fund the State of Israel. These are "negationist" historians and belong to the anti-scientific and anti-historical trend of revisionism which does not stop at reinterpreting certain events of contemporary history but go so far as to deny its existence. The second chapter of the thesis is dedicated to analysing this phenomenon, beginning with the preliminary symptoms, citing the most important spokespeople and the diferent theories with which they motivated the falsity of the Holocaust, calling the gas chambers, at best, a "legend." The third and final chapter focuses on a refection on the controversial issue of responsibility for the Holocaust and the Nazi massacre, which implies a careful study not only of the leader’s decision-making process, but also the particular complicity of a the scheming intelligentsia of technocrats and especially ordinary men, whose decisive role leads us to rethink of the Holocaust not only from the historical point of view but also from the human one. This context is the setngs for the innovative, albeit disputed, interpretations of two major historians such as Daniel Goldhagen, who made the implementers the interpretative key, the focus of studies on the Holocaust and focused atention on the role and responsibilities that they had in the materialisation of such a tragedy, considering age-old German anti-Semitism transformed into "eliminationist antisemitism" as the central explanation of the origins and motivations of the genocide, and Götz Aly, who reduces the role of anti-Semitic and racist ideology, describing a German population that reaps low benefits from the Jews’ assets and the looting of other European citizens under the Nazi scourge. 2